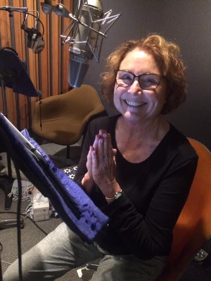 In a year of continuing challenges, we have very good news to report: Phase one of our Sacred Sites audio theater production is completed! I am thrilled to type these words!

We are so grateful for the support so many of you have provided. Without you, we would not have come so far. After months of preparation rehearsing, working with linguists and other consultants, and much more, we have completed 22 hours of recording. The Media Staff studio, a supporter of this project, has one of the best recording rooms in Los Angeles. The raw material sounds excellent. In my next letter, I will share clips of the recordings.

It is a pleasure to introduce to you Kalani Queypo (Blackfoot, Hawaiian) who reads with me Book 2 and the Epilogue. He is a founding member of the National American Indian Committee at SAG-AFTRA. Among his many credits are Terrence Malick’s The New World, Jamestown, and Fear the Walking Dead. I’ve included his headshot and bio plus studio shots at the end of this letter.

Phase Two has begun: editing, music composition and licensing, mastering, distribution, and publicity. Since we are an independent production, we must do everything we can to get this timely and inspiring project out to the public.

To do this, once again I need your assistance. Please reach out to anyone you feel would love this work and would join our mighty team of supporters — no amount is too small (or too large!).

Sacred Sites is a story that weaves the world together. It inspires us to love this earth and, thus to care for it in every way we can. It is essential that we understand natural systems and learn the many ways we humans have and can, once again, live in harmony with all life.

Thank you for being a part of this creation.

Kalani and me at the end of his session.

Me on my last day of recording (16 hours over four days!)

Jerry Mayfield, whose Media Staff studio was a wonderful place to work. He is famous for his sourdough bread which he served at every session with his homemade jam. What delight!